We made high camp 1 in great time and had loads of fun along the way. The sun did come out but it was early enough in the day that it didn't slow us down or drain our energy.

We dropped off one of our Polish friends at low camp 1 and gave him a pack of matches as he was out. He had horrible blisters and was only there to film his friends who would be skiing down later. 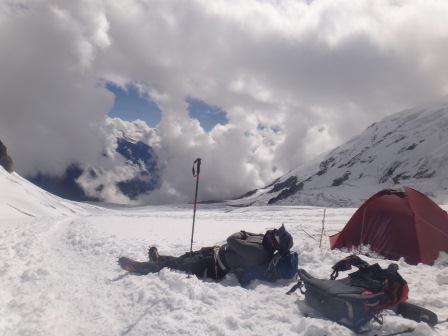 We spent the whole day lounging in our tents and even piled all four of us into one for some afternoon cards. It was hot but we were feeling great and enjoying the day. At one point in the afternoon, our Polish friend from down below did something wonderful and ridiculous. He took a 30 minute walk with extremely painful blisters up to our camp to return our matches as he was worried we didn't have any or would run out if he didn't return them. We loved him and laughed at him at he same time but we were really touched by the effort especially given the horrible state of his feet. This group of 4 polish that share our basecamp have impressed us time and time again with their modesty (they're up to an impressive challenge but don't brag one bit about how awesome they are) their consideration and their kindness. Not to say these are rare traits but they sometimes can be amongst groups on big mountains and we feel lucky to have a great mixed basecamp environment. 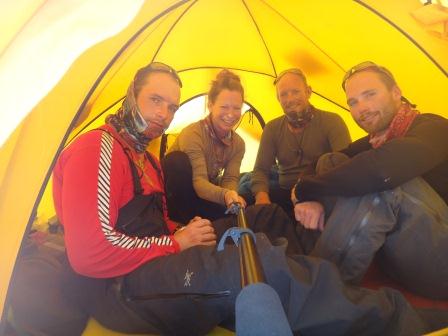 We went to sleep in high camp 1 playing a hilarious game of "would you rather" from tent to tent. It was a great way to pass time as we waited for the sun to go down. We had a great sleep and popped up bright eyed and bushy tailed at 3 am and started prepping for our 4 am start towards 6800m. It had been snowing all night not a lot but not a little and this was a mountain that was known for snow and avalanches. Not ten steps outside camp we had a change of heart. No Sherpa in camp 1 were going above as they were concerned about the conditions. We were too. So like a circus act we reversed our 3 am prep and got back into our tents hoping the snow would stop by sunrise. It didn't, even worse, we started hearing long avalanches from above. We couldn't see anything through the clouds but we could only assume we would have been crapping our pants if we had been on the route at that point. The circus continued all morning as we waited for weather report after weather report each hour. After 3 different reports we decided they couldn't all be wrong and all we could expect was similar weather for a few days.

This was really throwing a wrench in our acclimatization plans. We had been delayed waiting for the puja ceremony, delayed by a crazy flu and now the weather. Chances were a summit window would come soon. After our illness and delays we had all agreed this would not by an attempt without oxygen for any of us. 3 of us had hoped it would be but you need a lot of things to go right for that and that didn't seem to be the course this trip was taking. In the end it was a unanimous decision for oxygen and that has relived some of the concern we have over our botched acclimatization. If a summit window comes in late September we will go for it. If the summit window closes prematurely this next trip up with be converted into our final acclimatization round and we will wait for a window in early October. Right now almost every team if resting in basecamp. Our focus is on not getting sick and maybe having another shower. Baby wipe baths can cut it for only so long. We should have a few days of rest, food, music and movies in basecamp before starting out on our next push up the mountain.