After an easy walk to camp 1 (again) on the 24th we head off straight for camp 3 at the 25th. We left camp early in the morning to escape the extreme head off the day. The route wind true the ice fall and is probably the crux off the climb, although we are still at relatively low altitude. When we arrived in camp 2 at dawn our fabulous Sherpa’s; Karma & Lapka already made some tea for us. After a 30 min break we continued to camp 3. The route zigzags true a couple of seracs before it reaches a low angled slope that reaches the camp at 6800m.
We walked in to camp 3 just before lunch. Now it was time to cook; hydrate and eat! The wind picked up later in the day and we had a very windy night in camp 3. The original plan as to leave for camp 4 the next morning and attempt the summit from there, but this was impossible with these winds. 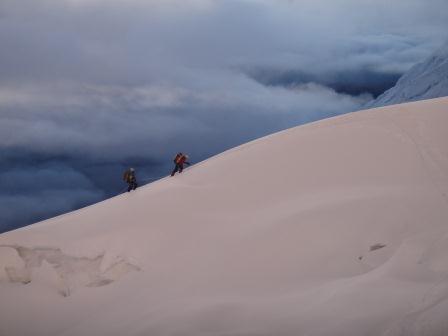 In the evening on the 26th we decided to go straight to the summit. The 27th was a very nice day without any winds according to our weather forecast. The 28th was not sure, so we had to gamble between a very long and strenuous summit push or climbing to camp 4 with the chance of bad weather on the 28th.

We headed off at 8pm the same evening on the 26th. It a long climb true the headwall going to camp 4 at around 7400m. At around 2 am we reached here had a small break and continued our climb across the plateau towards the summit ridge. Between 9-9:30 we summited on a beautiful day: perfectly clear and no winds! Out gamble paid off!


Grace made it back to base camp the same day and Richie arrived today; all in good shape.
Our summit accounts are still sinking inn, we will post more personal and detailed stories soon.